November.  These are the last days to dig for treasure, or bury it. My dog Sierra and I go out walking into the held breath of late fall. It’s silent and the sky is stone-coloured. Wild asparagus flames at the top of the cliff and tamarack’s last needles are a pale greenish-yellow.

There are still a few small knots of brilliant orange on the branches of mountain ash, but most berries lie on the ground. A lone apple hangs from a dark branch. The world is suspended, waiting. No obvious treasure to be seen.

But a few weeks ago, before the ground thickened with frost, I dug or pulled up treasures in the form of yellow dock, dandelion, and elecampane roots. I was too late for one of my favorites which is wild sarsaparilla (Aralia nudicaulis—cousin of ginseng). With its big canopy of five leaves and its right angle rhizome bulging at the joint, sarsaparilla tea made from the dried root is good for so many things, including, I discovered, flu discouragement! I tried it a few years ago, just when the first aches came on, and it worked! No flu. But the time to harvest wild sarsaparilla is in September. By now, it has shed its leaves on the forest floor and is unfindable.

You can still see a few yellow dock (Rumex crispus) though. 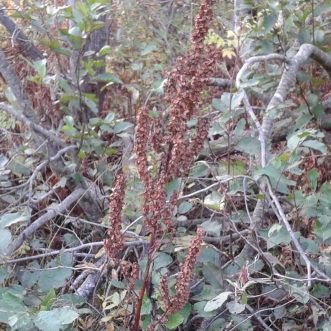 It is easy to spot this time of year because the once pale flowers are now the colour of dried blood. I find it satisfying to draw yellow dock out of the earth, not at all like the ordeal of digging burdock (Arctium), which seems to have a root that goes half way to China and which clasps the earth in an iron embrace.

Here’s how you harvest yellow dock , provided the ground is still soft. First approach the dock respectfully and look at its overall situation. Hopefully the surrounding weeds are not too dense. Then take the thin but tough stalk in both hands and pull slowly. You’ll feel the plant let go.

Once harvested, cut the root into small pieces before it dries out and gets so hard you have to take a chainsaw to it. After it’s diced, you can make it into a tincture (immersing it in alcohol for a month or so). Or you can dry the root pieces and use a few to make an infusion or a decoction.  Yellow dock, like dandelion, is said to be good for the liver and for detoxifying the digestive system. And, unlike most buried treasure, it is easy to come by. It is also held in high esteem by herbalists.

So that’s yellow dock. Another wonderful root is dandelion. One morning about three weeks ago I decided it was a good time to harvest some dandelion (Taraxacum officionale) roots. 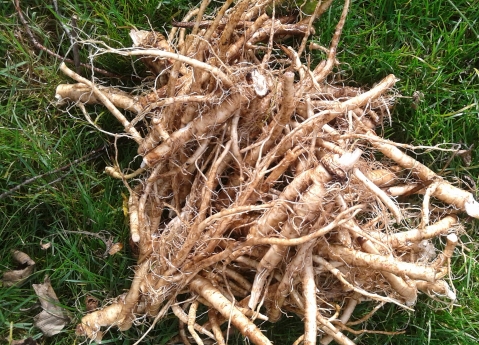 The moon was waning, so the roots were at their most vital. I jumped on the shovel and plunged the blade down into the cold soil past the dark green leaves. And then— a pirate’s chest full of muddy doubloons in the form of roots thick as your fingers. They shed their dirt-womb and smelled fragrant and bitter at the same time. Later, after I’d washed them, I roasted the dandelion roots slowly in the oven. Now I’ll grind them in the coffee grinder. How many grinders have I broken doing this! (perhaps mortar and pestle is better). Whenever need dictates, I can brew up a cup of delicious (well alright, not delicious to everybody) dandelion root tea.

Then there’s elecampane (Inula helenium) which I dug up the same day as I dug the dandelion. There is something magnificent, as well as a bit creepy, about an elecampane root. 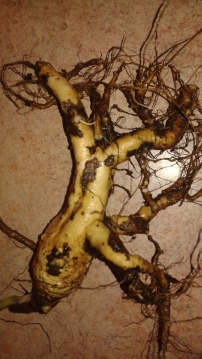 It looks like a heart with arteries and veins attached. Once you wash the dirt off you half expect it to scramble away. And what a pungent tasting herb. Not as head-exploding as echinacea but very strong. I made elecampane honey some weeks ago and brought it over to my neighbor who has pneumonia (elecampane is specifically indicated for lung infection), having first checked to make sure it would not fight with the antibiotics he was taking. I expected him to wrinkle up his nose in disgust when he tasted the bitter honey, but instead he said, “Mmmmm, how often can I have a spoonful of this?” Which made me believe, rightly or wrongly, that this was a treasure meant for him.

Last week, instead of digging for treasure I buried it. I planted garlic cloves in one of our raised beds, and then covered them in a blanket of seaweed. The next day on one of our last unseasonably mild days, I stowed daffodils and tulips in the secret earth around the grape arbour. Now, over the long winter, in the cold dark crucible of soil, these bulbs will be transformed, and will, with any luck, blaze into treasures next spring.